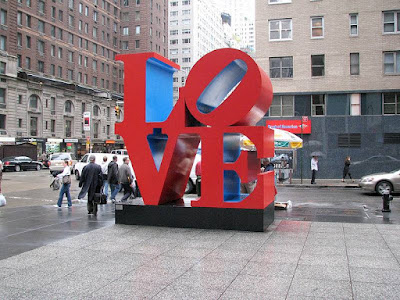 How many take love for granted?
It starts out sweet and then disappears.
Imagine the fun they had putting this sculpture of LOVE into place. A few days later, people still notice and appreciate it.
A few weeks later people start using it as a landmark.
"Turn right at L-O-V-E, go down three blocks and turn left on
I-Could-Care-Less Street!"
A few months later they pass in its shadow, hardly noticing.
Such is the way with love that is not nourished or nurtured.
But look! Years later it still stands tall and strong!
Of course it does. It is more stable and more powerful
than all the inattention in the world.
at 15.1.19