When Someone You Love Is Dying

In my years as care manager and hospice social worker I have met a surprising number of people who have had Near Death Experiences. Some have "seen the light", one saw no light at all but floated in the darkest darkness in the most comfortable and blissful state he had ever experienced. One in his late 50's, continues to rage that he had to return to his earthly existence. Ever since his revival he has had an explosive temper. They blame it on his brain injury. He blames it on having to leave the State of Heaven.

It is surprising to me that not all of these people had faith in a higher power or a belief in an Afterlife.

Death can be a frightening thing. As one dying client said anxiously, "I've never done this before." The first time doing anything is always scary. Try to rest assured that throughout the process of life through death, you will be Taken Care Of.

Have faith that even though you may be an Earthly Caregiver for someone you love, there is Something Greater ready to take over when your loved one leaves.

There is a reason we typically enter this world crying and leave this world smiling. 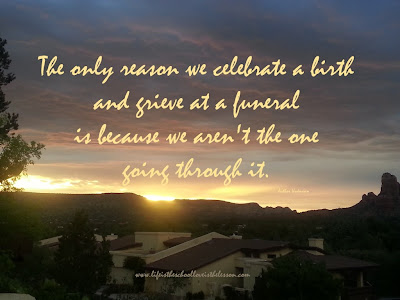 Lynette was reviewing her life with me. Now in her late 80's, she would be in her 60th year of marriage had her husband not died before their 30th year together. There has never been another man for her.

She recalled the circumstances following his death. The burial took place in his hometown quite some distance away. She traveled there by plane, accompanied by her daughter and her baby granddaughter. She found herself saying "Dear God, please let the plane crash. Let it go down." She did not want to live life without him.

She has now been without him as long as she had been with him. As she watches her great-grandchildren grow she thanks God every day that He did not answer her prayer spoken in her bleakest moment.

Sometimes we get discouraged when our prayers aren't answered, but there's generally a very good reason.  It may seem selfish and self-centered of her to have prayed that prayer on the plane that day, but when we are in the storm of loss and bereavement, it is natural to lose total perspective for awhile.